The power-absorbing mutant of the X-Men in Mavel Comics, Rogue, battles the unaligned Succubus from Lost Girl, Bo Dennis, in a battle featuring women whose otuch can kill.

Boomstick: I think I need to lie down for a bit...

Wiz: Rogue and Bo were pretty evenly matched in how deadly their powers are, and while Rogue was able to absorb Bo's Succubus powers for a bit, they were ultimately not very effective against their source.

Boomstick: It was effective against me. Rogue also possesses the ability to fly, but that's pretty pointless considering Bo has a big advantage with her powers.

Wiz: Rogue's absorption powers require skin contact, and while Bo needs to do that in order to make other people comply to her will, she ultimately doesn't require it to drain chi, which meant that she was able to take down Rogue even while the latter was in mid-air.

Boomstick: Let's wrap this up, preferrably in a Bow.

Wiz: The winner is Bo Dennis. 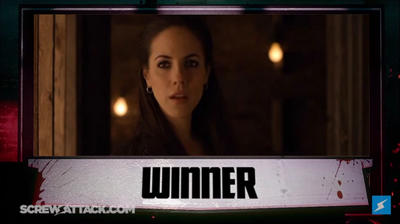