NRG (pronounced "Energy") is the Simplicitrix's DNA sample of a Prypiatosian-B (also known as a Missusapien) from the planet Yadergorod.

In Season 3 onward, NRG's suit changes to be taller and more agile. It gains spikes on his elbows and shoulders. His helmet changes drastically and he can now easily take it off and leave the suit. The Simplicitrix is moved to his left shoulder.

Negative NRG has an aqua and blue suit, and his radiation is purple. His suit does not change when Alan's suit changes. His inner suit has white instead of red, and the back has F.U.2. written on the back.

Future NRG possesses four alternate forms of his suit. The Simplicitrix symbol resides on the neck/chest area of all four. The suits are: 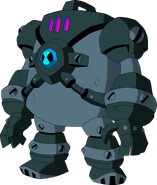 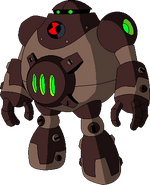 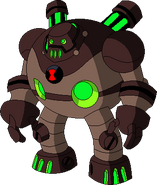 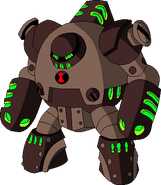 NRG's dragon name is Fringeltdet, which can be broken up into, "Frin Gelt Det," meaning hot metal suit.