Heatblast is a magma-based lifeform whose body is composed of a bright red inner magma body covered by a dark red, almost black, rocks. As a fire-based entity, his body radiates high amounts of heat. His feet have a slight oval-like design with only two toes and one back toe. Heatblast's tongue is made of fire. He wears the Simplicitrix symbol on his chest.

Donny as Heatblast has purple flames. His eye holes are not connected to his flames. The rocks on his body are shaped like gloves, a vest, shorts, knee pads, and anklets. He wears the "Donnytrix" on his right pectoral. 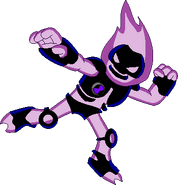